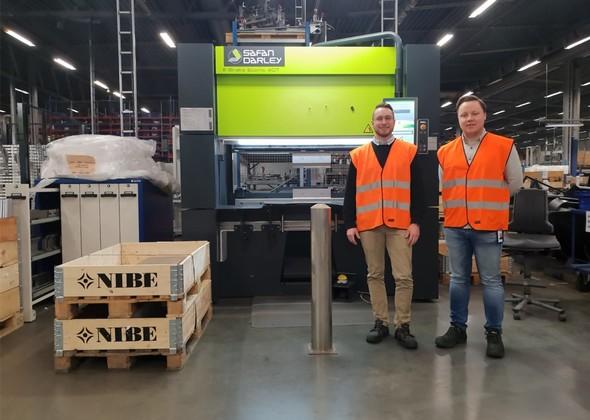 Nibe was founded in Markaryd in Småland 70 years ago, since then it has grown into an international company with more than 16,000 employees around the world.  Within its three business sectors, Climate Solutions, Element and Stoves, the company develops and manufactures environmentally-friendly, energy-efficient solutions for indoor comfort, as well as components and solutions for intelligent heating and control within industry and infrastructure.

Contura is part of Nibe Stoves, a division within the Nibe Group with a turnover of approximately SEK 20 billion. Contura is a market leader in Sweden in stove products and one of the leading manufacturers in Europe.
Nibe in Markaryd, which manufactures Contura fireplaces and Premodul chimneys, has recently invested in two brake presses from SafanDarley; an E-brake Ultra E130-3100 and an E-brake Econic E40-1600, supplied by Din Maskin.

“When we decided to invest in new brake presses, we wanted machines that would provide stability in the manufacturing process, give consistent results and where we would be able to use the same tools as before. They also needed to be ergonomically designed machines where the operator wouldn’t need to handle heavy tools. This is exactly what SafanDarley’s brake presses offered,” says Patrik Ahlin, production group manager at Nibe, in a press release.

“I’m delighted with the machines as they run quietly and smoothly. The tool set-up has worked well for the majority of our parts,” says Stefan Kovac, brake press operator, who was involved in test-running SafanDarley’s machines ahead of the investment.According to Fredrik Carlsson, product manager for SafanDarley at Din Maskin, the servo electric brake press has very low maintenance and running costs, and is very quiet in operation. Since the machine doesn’t use hydraulic oil, servicing is also minimal and the lack of a hydraulic system means even higher precision and more consistent bending results.

Patrik Ahlin also emphasises the environmental aspect, since Nibe is very active in its environmental work. The company is always trying out new ways to reduce its energy consumption and it is therefore important that its manufacturing is modern, resource-saving and efficient.

Herman Nordqvist, production engineer for welding and brake pressing, says that another important aspect was that the machines had to be easy to set up, since new models of fireplaces are launched regularly and therefore new parts need to be produced. “Here at Nibe, we work together closely in the development process so we can ensure we can only get better,” concludes Patrik Ahlin.

SafanDarley recently delivered a special, belt-driven bending aid to sheet metal processing company Voss in Germany. This special bending aid, the E-Mate 7500 Belt Drive, is fitted to an H-Brake 400 Ton press brake and is able to support complex products weighing up to 500 kg.

Leer más
‘SafanDarley’s operating model is fully aligned to ours’

Meijer Metal in Sint Jacobiparochie in Friesland (NL) will celebrate its centenary in two years. Yet despite its age, this specialist in sheet metal and pipe processing is exceptionally modern and forward thinking. Its machine fleet boasts no fewer than ten SafanDarley machines, including three new E-Brake Ultra press brakes.